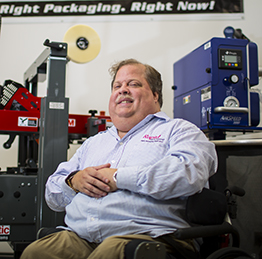 Not many people can say they’ve worked for a company for more than 20 years; Lifeworks Associate Mike Anderson can.

Since 1996, Anderson has been a key contributor for Champlin-based Rapid Packaging, a national company that sells packaging equipment, materials, and supplies.

“Rapid basically started 40 years ago in a barn,” said President and CEO Mike Sime. “I acquired the company in 1988 and we’ve grown it up from there to today it’s about 40 people and about 30 million in sales. Our company is end of line packaging. We sell all the stuff once something’s been manufactured, now it’s got to ship to the customer – that’s what we do.” 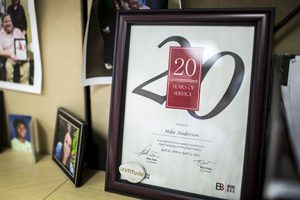 Anderson’s biggest impact on the company has been in improving its day-to-day processes. By allowing others to better focus on sales, he has helped improve efficiency across the board, and his vast experience has made him highly valuable to co-workers and management alike.

“Mike’s one of those guys that is encouraging, is fun, and people are inspired by it,” Sime said. “He knows where all the bones are buried. He knows how we built this up. He’s a go-to guy.”

As the company has expanded over the past two decades, so too has Anderson’s role. Initially, he was only in charge of sorting the mail, but his positive attitude and willingness to take on additional projects led into filing, envelope stuffing, and other administrative tasks.

“When we had the acquisition [of Berg Bag] in 2013, Mike’s workload went up by another 30-40 percent for all of our warehouse paperwork, our mail, accounts receivable, and he took on accounts payable also for both companies,” said Lynn Slettedahl, customer service manager. 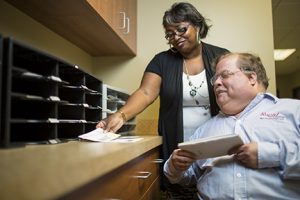 Sime pointed to Anderson’s corporate memory, his understanding of how and why the company operates the way it does, and his innate ability to build energy as reasons for his success.

“Our theme this year is gratitude and it’s gratitude for all the people that got us to 40 years and help us to grow and Mike’s clearly one of those key people,” Sime said. “When you’ve got over 20 years with a company, you get it and you’re a part of that whole culture.”

Because company leaders like Sime have placed a lot of faith in Anderson’s knowledge and abilities, his career has blossomed.

“Anything he wants to be or can be, we’re wide open to helping him fulfill his dream,” Sime said.

Rapid Packaging is one of nearly 300 Lifeworks employer partners in the Twin Cities and greater Mankato area. Interested in working with us to hire individuals with disabilities at your workplace? Visit our Employer Partnerships page for more information.