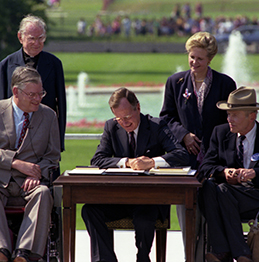 What is the Americans with Disabilities Act?

July 26, 2020 marks the 30th anniversary of the Americans with Disabilities Act (ADA). This historic civil rights law “prohibits discrimination on the basis of disability in employment, state and local government, public accommodations, commercial facilities, transportation, and telecommunications” (U.S. Department of Justice). The ADA was the world’s first comprehensive declaration of equal rights for people with disabilities.

Before it was passed, barriers to inclusion were so pervasive that people blamed inaccessibility on individuals with disabilities, rather than on society’s shortcomings. Most public transportation was not accessible and employers could discriminate on the basis of disability. For example, Judy Heumann, a world-renowned disability rights activist, earned her teaching degree in New York and was denied her license from the Board of Education (BOE) . Their reasoning? A doctor had said she posed a “health and safety risk” due to her use of a wheelchair. Heumann eventually brought a lawsuit against the BOE and won – but prior to the 1990s, discrimination like she experienced was commonplace (Being Heumann: An Unrepentant Memoir of a Disability Rights Activist).

We needed a civil rights law of our own.

Years of tireless advocacy work led by disabled activists and their allies made the passage of the ADA possible. In the 1970s and 1980s, leaders with disabilities such as Judy Heumann, Ed Roberts, Kitty Cone, Michael Winter, Pat Wright, and so many others, as well as groups such as American Disabled for Attendant Programs Today (ADAPT), American Coalition of Citizens with Disabilities (ACCD), The Berkeley Center for Independent Living (The CIL), and Disabled In Action were essential to pushing forward key civil rights initiatives that paved the way for more equitable treatment and protections for future generations. 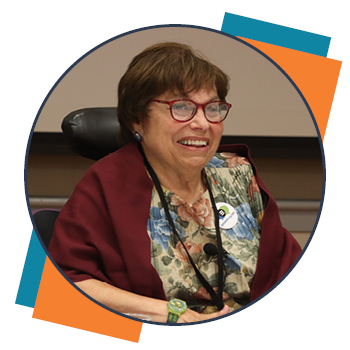 Former Minnesota Senator, David Durenberger, and former Iowa Senator, Tom Harkin, along with former Representatives, Tony Coelho of California, and Hamilton Fish Jr. of New York, introduced the ADA to the U.S. Congress on May 9, 1989.  When reflecting on its passage, Durenberger shared that many people, businesses, and community groups said they could not afford to make the changes outlined in the ADA; his response to them was: “We can’t afford not to do it.” (Minnesota Department of Administration: Council on Developmental Disabilities).

The ADA broke down what President George H.W. Bush referred to during its signing as “the shameful wall of exclusion… which has for too many generations separated Americans with disabilities from the freedom they could glimpse, but not grasp” (U.S. Access Board). People with disabilities could now – as Heumann stated in her powerful testimony to Congress in 1990 supporting ADA – participate in “the ordinary daily life [which] non-disabled Americans too often take for granted, [such as] the right to ride a bus or a train; the right to any job for which we are qualified; [and] the right to enter any theatre, restaurant, or public accommodation. The passage of this monumental legislation, will make it clear that our government will no longer allow the largest minority group in the United States to be denied equal opportunity. To do any less is immoral” (Crip Camp: A Disability Revolution).

The Barriers that Remain Unbroken

The intent of the ADA was to fully integrate communities. Though we have come a long way and are much closer to that vision 30 years later, there are still everyday barriers to inclusion that need to be addressed such as restrooms and street accessibility.

Accessible restrooms in the community continues to be a significant barrier. Just because a bathroom stall is larger and has a handrail, does not mean it is accessible. For example, “accessible bathrooms” may not work for someone with a personal care assistant or people who need an adult changing table. Activist Heumann said in the 1980s: “I’m very tired of being thankful for accessible toilets, [because] if I have to feel thankful about an accessible bathroom, when am I ever going to be equal in the community?” (Crip Camp: A Disability Revolution).

While access to streets has improved, there is still work to be done. Disability rights activist, Ed Roberts, and the Berkeley Center for Independent Living, successfully secured the first curb cuts (a ramp cut into a street curb to provide wheelchairs or strollers access in the country. Roberts reflects, “When we first talked to legislators about the issue, they told us, ‘Curb cuts, why do you need curb cuts? We never see people with disabilities out on the streets. Who is going to use them?’” (Minnesota Governor’s Council on Developmental Disabilities, Parallels in Time). When streets have curb cuts, as Ed Roberts knew, more people with disabilities would be able to freely and independently move around their communities. While we do have curb cuts in Minnesota – what happens, as written in the Minneapolis StarTribune, when we can’t access them because of winter snow?

How to Honor the Legacy of the ADA

The ADA was a wonderful achievement, but it was only a tiny tip of the iceberg. You can pass a law, but until you change society’s attitudes, that law won’t mean much. – Denise Jacobson, Writer and Disability Educator 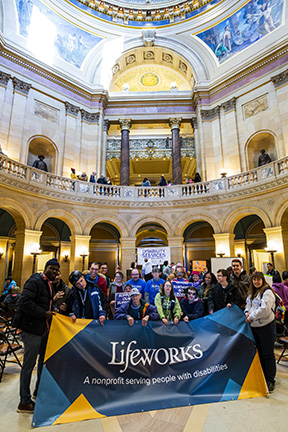 While we can and should celebrate the progress made over the past 30 years, it is also important to honor the movement by reviving calls for equality and justice. One of the best ways to do that is by learning more about the ADA and disability rights.

Some great ways to honor the movement include:

Lifeworks is actively working with organizations across the state to build connections that advance disability inclusion in our communities. Over the next several months, we will be sharing self-advocacy resources for people with disabilities and their families. One way in which we did this is by hosting our first-ever self-advocacy conference in July for people with disabilities. Our conference partners included organizations such as the University of Minnesota – Institute on Community Integration, Advocating Change Together (ACT), The Arc Minnesota, Minnesota Disability Law Center, and Minnesota Disability Justice Network.

Be on the lookout for more ways you can get involved in a broader movement led by people with disabilities—as we work together to create the collective, inclusive future that we all want to see.