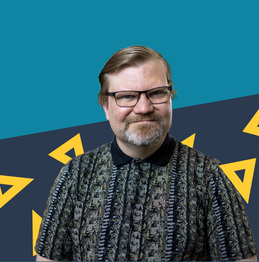 When Scott was first hired to work in the mailroom at Securian in 2001, he never imagined he would be taking on the role and responsibilities he has at his job today. “I probably thought I would’ve only been here a few years. I had never been in a place for a long time,” Scott says.

For nearly 19 years, Scott was most comfortable working in a familiar environment, performing the same tasks every day at Securian. “Prior to COVID, I used to deliver mail on a regular basis to different floors. I did that for almost 20 years,” he says. “A lot of times, people get kind of comfortable in their own little niche, and they don’t want to do anything different because that’s what they’ve always done.”

In October 2020, after several months off of work due to the COVID-19 pandemic, Scott’s philosophy shifted, and he decided he was ready to grow in his career. Scott took on a new role as an office service representative at Securian, where he is responsible for referencing agent data in an online database. “Prior to COVID, I probably would not have thought of me working with [a] computer. No way am I ever gonna do that,” he claims. “I had seen [a computer] before. Everybody else had been doing it for years and went to school for it. I didn’t do that.”

Scott looks back at his previous fear of change and recognizes his achievement in challenging himself to grow. “I’m really proud of myself [that] I was able to do that. It wasn’t easy at first,” he acknowledges. One reality of change is that you may not get things right the first time. With a blend of personal persistence and a support network to back him up, Scott has excelled in his new role at Securian. “The thing I’ve learned is don’t make the same mistake 85 times. People don’t mind you making a mistake. But don’t turn around and keep making it over and over.” 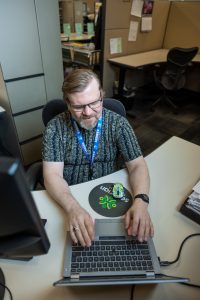 To ensure he felt successful at his job, Scott leaned on his coworkers and his Lifeworks job coach, Joan, to assist him as he learned new work tasks. “They know it’s not something I can learn overnight, or it’s not something that can happen immediately,” Scott says. Joan has worked with Scott at Securian since 2018. Joan previously had been at Securian full-time, supporting other staff receiving employment services with Lifeworks. When she saw that Scott was getting support from his coworkers that traditionally may have been provided by a job coach, she started taking a step back. “He had to go to his coworkers, and his coworkers took that piece of training and development, so I’ve kind of stayed in the background and let that continue,” Joan shares.

Both Joan and Scott have recognized this as an essential step in Scott’s career progression at Securian. “I never thought I’d be doing it myself. But at the same time, it has helped me learn and do things that I didn’t think I’d do,” notes Scott. He began receiving services from Lifeworks in 2001 when he started working in the mailroom at Securian. “[Lifeworks] has really helped me out a lot. [They’re] all about wanting to help the person they’re working with.”

I never thought I’d be doing it myself. But at the same time, it has helped me learn to do things that I didn’t think I’d do.

Having worked for Securian for over 20 years, Scott takes pride in his work and the opportunities and benefits of working in competitive employment. “I’m proud of the company I work for. I like to tell people about it. You can always meet new people too,” he says. Among the other perks of working at Securian, he mentions good benefits, not being concerned about getting enough work, and being able to work Monday through Friday full-time. Outside of his day-to-day responsibilities, Scott got involved in the workplace culture by joining an employee resource group focusing on mental health and wellbeing for staff. “I’m always willing to help make people feel better and feel good about themselves,” says Scott. He also had the experience of being interviewed by KARE11 a few years ago. “It was kind of neat to be able to be on the news. A lot of people wouldn’t do that.”

Being employed at Securian has allowed Scott to explore his passions outside of work and have money to spend on what he wants for himself. He enjoys going to concerts, spending time with his family and friends, attending sports games to support his favorite teams, and recently purchased a new TV. He has also taken the chance to try new things, just like at work. “I was in a musical five or six years ago. I’d like to do it again,” he proclaims. 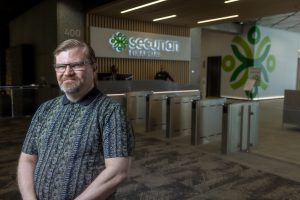 As Scott approaches two years of working in his current role, he provides some thoughts on his future. “Just be the best I can be. Enjoy life and be able to do what I enjoy doing.” While looking forward, he also realizes how he pushed himself to get where he wanted to be. “One thing I’m learning about me is [to] not worry about things you can’t control. I know it sounds easy, but it’s not. I’m learning, and if I can just let that go and just focus [on] what I have and what I can do for myself.” He then adds one more hope as he considers the future, “I want to live to see 125. That’s my goal. It’s only 78 years away!” he jokes.

After working in the same environment for roughly two decades, Scott challenged himself to step outside of his comfort zone and, in doing so, recognized that he could progress in his career. He was patient with himself as he learned new skills and developed a support system that worked best for him as he grew into the role. Joan views this as the pinnacle of the Lifeworks’ employment services model. “He took a big leap forward. In my mind, he is embodying everything that we want to happen for a person in employment.”

He took a big leap forward. In my mind, he is embodying everything that we want to happen for a person in employment.

There are often barriers in the workplace that prevent someone from thriving, but there are also barriers we, as colleagues, friends, and community members, can unknowingly uphold. We should strive to promote every individual’s goals, whether in the workplace or the community and provide space to explore opportunities. In Scott’s case, Joan partnered with him to support his goal of advancing in his career at Securian. She understood that she could provide support while encouraging Scott to recognize his capacity to progress at work. “You have to believe you can do it and really make an effort to work hard to do it,” Scott says, considering his own agency. He adds a final piece of advice for others who want to make a change: “Never give up hope.”