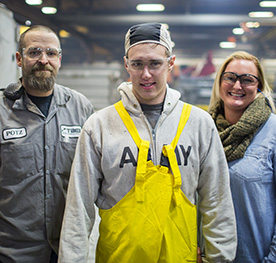 In the past, frequent labor changes have made it a challenge to get new team members trained in so the quality and workflow aren’t negatively impacted. Lifeworks contacted me one day with a candidate who would be an ideal match for our workforce needs.

He has been part of our team for more than a year now, and is the second-most-senior employee on this team. He’s added significant value to the team in many ways, including the steady, reliable, and quality work he does. We look forward to more opportunities like this where Truck Bodies & Equipment International can partner with Lifeworks to make a difference in our community.

When Wyatt Kihlstrom starts cleaning a vehicle, he won’t stop until it’s spotless. As an auto detailer for Chuck Spaeth Ford in New Ulm, Kihlstrom cleans, scrubs, and waxes every square inch of the vehicles on his list – from the floor mats to the rims.

“They’ve got to be nice for the customers,” Kihlstrom said. 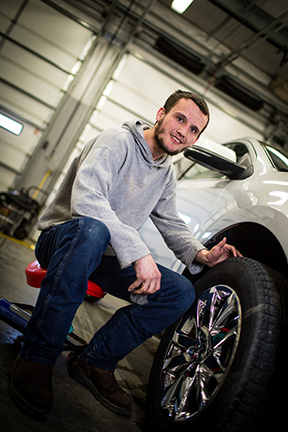 Lifeworks Associate Wyatt Kihlstrom puts the finishing touches on a vehicle during his shift at Chuck Spaeth Ford.

Since Kihlstrom was hired at the dealership a little more than six months ago, he’s made the daily trek from his home in the small town of Gibbon. Luckily, his co-workers were more than happy to help him find reliable transportation.

While leasing a new vehicle was easy, cleaning cars, trucks, and SUVs can have its share of challenges.

“People drive and they don’t clean their rims and salt gets in there and it just makes it a complete disaster,” Kihlstrom said. “So we have to sit there with scratchy pads and scrub the rims and then basically that’s how they turn out is just you get that nice shine.”

It’s that shine that Kihlstrom strives for every day.

“So the vehicles that are all in the showroom, we clean them to put them inside,” said Operations Manager Brittney Schmiesing. “When Wyatt is done with a car, he’ll say ‘Do you see that showroom shine?’”

Amanda Vaubel has big plans for her future. She wants to work full-time, become self-sufficient, and go to college. And she’s working hard to make it happen. 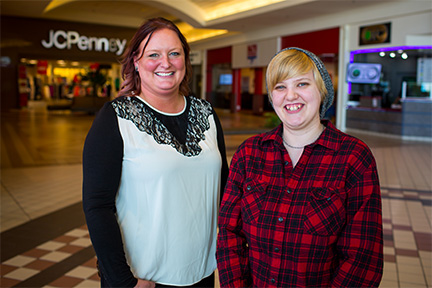 When she first started her job at JCPenney in fall 2015, it was just a seasonal position. Because of her ambition and work ethic, she was offered a more permanent position two days per week unloading trucks. Her work at JCPenney supplements the three or four days per week she works at Microtel as a housekeeper.

“I like to just keep busy,” Vaubel said. “It gives me a lot of things to do and I like to organize.”

Although Vaubel can take all of the credit for securing both of her jobs, Lifeworks offers her the extra job support she desires to help meet her long-term goals.

With that support, Vaubel is well on her way to achieving her goals.

Hard Work Paying Off for Lifeworks Associates at Herberger’s

Earning a reputation as a hard worker isn’t easy, but once you do, building a successful career comes naturally. Since he was hired by Herberger’s in 2011, Andrew Wilmes has done just that.

Throughout his eight-hour shifts in the receiving department, Wilmes unloads, tags, and organizes items ranging from handbags and accessories to dresses and shoes.

“Andrew is a good kid,” said Receiving Supervisor Cheryl Lang. “We could use a few more like him.” 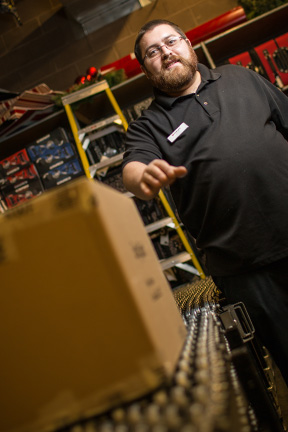 Last fall, fellow Lifeworks associate Joe Miller joined Wilmes on the receiving team just in time for the busy season, which typically lasts from October through February. During Black Friday, it’s not uncommon for shifts in the department to extend to 12 or 13 hours as a steady stream of merchandise is delivered.

“It’s not the same thing every day,” Wilmes said when asked his favorite thing about his work.

During the warmer months, Wilmes and Miller continue to stay busy. While Wilmes goes to work cleaning up Hiniker Pond for the City of Mankato Parks Department, Miller provides janitorial services for Keepers RV Center – each of them committed to building their reputation as hard-working employees.

Fill high-turnover positions at your business by partnering with Lifeworks to employ people with disabilities! We’ll put our 50 years of experience to work for you and provide long-term, dedicated workers who will improve the diversity of your workplace and help you save money.