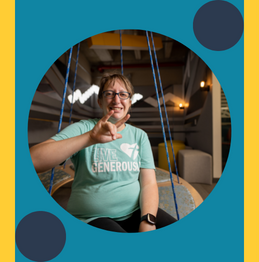 It’s a cool, overcast Thursday morning in Mankato. A water main has just broken in the Mogwai Collaborative, a coworking space near the winding Minnesota River and downtown Mankato. The water falling from the upper levels is slowly building on the bottom floor, eventually forcing the occupants to evacuate. The unfortunate timing of this incident lined up with one of the two Thursdays a month when Alyssa, a person accessing employment support through Lifeworks, leads an American Sign Language (ASL) class for a Lifeworks community skill-building group. The class ends early, but not before Alyssa can make a timely pivot in her lesson for the day. 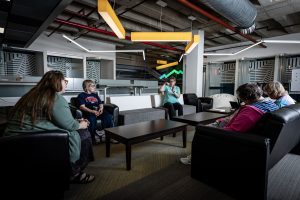 Her first lesson, fittingly, is to teach the group how to sign “pipe broken” in ASL. Together, the group follows her lead. After the class feels like they have it down, Alyssa continues to guide them through signing different phrases related to emergencies. “Call 911,” “tornado,” “car crash,” and “ambulance” are all covered as she walks the class through a list of different emergency situations. All the while, she weaves in valuable perspectives and essential things to consider when communicating with sign language, such as the generational differences for people who use sign language and the importance of facial expressions when communicating.

ASL has been a part of Alyssa’s life since she was a child. “I used to grow up learning signs because I was hard of hearing as a kid. They found out I had too much fluid built up in my eardrums, and I had surgery,” she recalls. Her eagerness to continue learning the language continued after she attended a day camp alongside campers who were deaf. Alyssa developed friendships with the campers early on and leaned into her values of wanting everyone to feel included. She remembered how vital it was for her to use ASL to involve all campers in creating a daily schedule and projects for the day.

Alyssa began taking ASL courses at South Central College in Faribault after realizing her previous path wasn’t one she wanted to continue following. She had been going to school for culinary arts but soon found that it wasn’t the right fit for her and her long-term career goals. At the time, Alyssa worked at Oak Terrace Senior Living in North Mankato. One day when she was working, representatives from South Central College came to teach residents American Sign Language. Alyssa knew after her conversation with the teachers that she wanted to explore learning the language further saying, “I’m like that (referring to ASL). That’s what I want. I wanted to help people.” Alyssa remembers a resident at the senior living facility who was deaf found it challenging to communicate with others. Alyssa was driven by the opportunity to change the experience for folks who primarily communicate through sign language. “I can make someone’s day, actually,” Alyssa says about being able to communicate through sign language with the resident. “If I can make a difference in that guy’s life at Oak Terrace, I’m pretty sure I can make a difference [in] someone else’s.”

Since enrolling in the ASL class at South Central College, she’s been able to use her ASL knowledge to make a difference at her job at Panera Bread. “I had one customer who had her order wrong,” Alyssa explained, sharing that the customer was deaf and the cashiers were not equipped to communicate with her to correct their mistake. Alyssa quickly stepped in and signed to the customer, “Need help?” The customer signed back, “Finally, someone understands me.” Using her knowledge of sign language and her strong desire to help people, Alyssa was able to correct the order.

Having finished the ASL course at South Central College, Alyssa is taking time to figure out how to achieve her goal of becoming a certified ASL interpreter by researching college programs and their requirements. Alyssa is working closely with her Lifeworks service facilitator, Linnea, to navigate options and make a plan that best suits her aspirations. While working toward her ultimate goal of becoming an interpreter, Alyssa started teaching ASL to a group of folks supported by Lifeworks in Mankato. Through conversations with staff at Lifeworks, Alyssa discovered teaching ASL would help others learn and would also progress her own knowledge of ASL. “[They suggested] I start teaching signs as I go but also learn signs myself,” Alyssa says. 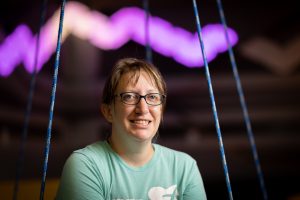 When she began teaching, Alyssa admits, “It was actually kind of exciting. [I was] not as nervous, but mostly excited. I would write ideas down as I go, make flashcards, and make it like a game.” As time passed, the class became more than just teaching folks how to communicate with ASL. Linnea recalls a day when Alyssa’s lesson tied together the causes of racial justice and disability justice by connecting how Martin Luther King Jr.’s advocacy to end racial segregation in the United States was similar to pioneers who advocated to end exclusion for people who are deaf. “I like to add a little history, deaf history, about founders who broke the barriers of diversity and what they did in the past, which has really helped future generations,” she says.

I like to add a little history, deaf history, about founders who broke the barriers of diversity and what they did in the past, which has really helped future generations.

Alyssa’s knack for teaching and connecting with other folks at Lifeworks has a meaningful impact not just for her, but also for those learning with her and the staff who interact with them. Alyssa is currently teaching a group of four individuals, one of whom identifies as deaf. She believes the individual and the group benefit from learning ASL together, because they can now all communicate with each other better.

Alyssa often thinks about her time working at the senior living facility and the resident who communicated with sign language. She remembers that the resident did not feel accepted by others simply because he communicated differently. “You can accept a person like me with Autism, but you can’t accept him with his disability?” she wonders. “He was the only person that would sit by himself off in the corner, and it’s the same thing I went through in high school.” With patience and empathy, Alyssa is learning sign language not just to benefit her in her future career but to create a community wherever she finds herself.

Linnea recognized the importance of creating space for Alyssa to explore her passion and her ability to forge genuine connections. She says, “Some of my favorite days have been when [I] take a step back and just watch Alyssa’s ASL class interact. They just want to learn and want to build community. They just trust Alyssa. I really get to watch Alyssa thrive in a unique way.”

What is really important to me is that we understand each other.

Alyssa continues to lead the ASL class two times a month. One day her classes may end, but her abilities as a teacher and community builder will continue as she works to become an ASL interpreter. For now, she remains excited to teach more classes. “All I can say is as long as they’re actually still able to continue learning, it’s pretty cool that they want to engage and learn more, instead of [me] being this boring teacher!” she laughs. Above all else, she says, “What is really important to me is that we understand each other.”