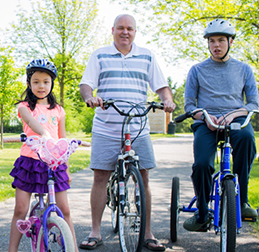 In 2004, Doug and Nancy McManus uprooted themselves from their Los Angeles home and journeyed nearly 2,000 miles across the country to Minnesota.

Their goal? Find affordable services for their son Louis, who has a disability. And this wasn’t the first time Doug and Nancy had made such a change.

“Lou was born in Taiwan; that’s where I met Nancy,” Doug McManus said. “We got a diagnosis in Taiwan, but weren’t really sure about it.”

After undergoing assessments from multiple agencies in the Los Angeles area, his diagnosis was confirmed around age two: autism.

“That’s when we started services with an institute called Lovaas,” Doug McManus said. “Doctor Lovaas was a pioneer in autism research back in the very beginning, so we felt fortunate to work with his agency.”

The road to Minnesota

With aging parents living in Iowa and a Minnesota-based office of their import-export business already established, Doug and Nancy had an opportunity to bring their family closer together by moving to the North Star State.

Add in the fact that they were dealing with funding issues for the services Louis was receiving in Los Angeles, and a move to Minnesota was all the more compelling. 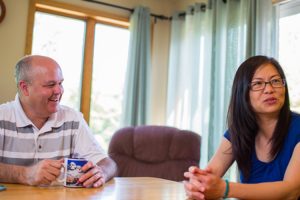 “At the time, the attorney general was fighting with the insurance companies to cover some of the autism funding,” Doug McManus said. “Applied Behavior Analysis was what we were using. It’s an intense, early intervention type of therapy. It’s very expensive – over $100,000 a year or something like that. We thought, ‘If we can get funding for this therapy that we like so much, OK, let’s move to Minnesota.’”

When the McManus family first arrived in Minnesota, Louis continued in-home therapy with a local branch of the Lovaas Institute.

“It was very congruent as far as therapy styles,” Doug McManus said. “He had in-home services all the way up to age eight, and then we got him in South Washington school district.”

After spending first through fifth grade in the district, Louis moved to a new program at the Minnesota Autism Center.

“Minnesota Autism Center started a school-based program in Eagan,” Doug McManus said. “So it’s a more typical school-type environment, but they provide the one-on-one therapy and can tailor each child’s programs to what they really need and what each family is looking for.”

“It’s been three years now,” Nancy McManus said. “We think it’s the right fit for him, so that’s where he is right now.”

Adding to the family

When Louis was their only child, Doug and Nancy said their lives were intense, but manageable. That all changed when Louis was joined by twin sisters and a younger brother – all less than three years apart. 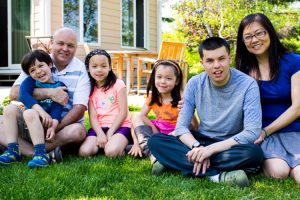 Doug and Nancy McManus with their four children.

“He was the only one for so long,” Nancy McManus said. “When we brought the twin girls home, he had the cutest reaction because he didn’t quite understand what siblings mean. So it was quite a transition and he learned how to kind of adopt them.”

Adding three small children to the family made it tough for Doug and Nancy to provide Louis with the support he needed each day, but they were unsure where to turn. A light bulb went off after the mother of one of Louis’ classmates asked if they had a PCA.

“We always thought he was so young,” Nancy McManus said. “It just never came into our minds that he would qualify for such a service.”

But qualify he did. After Doug and Nancy contacted Lifeworks, Louis was approved and enrolled in PCA Choice, allowing them to hire and manage a team of personal care assistants to help care for Louis.

“When our family got bigger, that’s when PCA really helped in,” Doug McManus said. “Lou would come home from school and there was somebody to take Lou and point him in the right direction and keep him focused on the right things while Nancy is busy with other stuff if I’m not home from work yet.”

Thanks to Lifeworks, Doug and Nancy were able to and gain a holistic understanding of the services available to them.

“Lifeworks has been on our side, fighting for families, and that makes me feel good,” Doug McManus said. “They help you and guide you through different services available. That’s very helpful for all families, and especially if you’ve got a new diagnosis.”

As Louis grows older, Lifeworks Service Coordinator Kelly Anderson continues to be a valuable resource for the McManus family.

“She fills us in on what’s out there, what other families are doing – it gives us some peace of mind and just information,” Doug McManus said. “She’s always a real valuable person to talk to about the services that are available. Lou’s at 16, so he’s getting to the age for some transition services; not quite yet, but it’s in the back of our minds.”

Since Doug and Nancy enrolled Louis in the PCA Choice program through Lifeworks, they’ve received the extra support they need to do more with their lives. 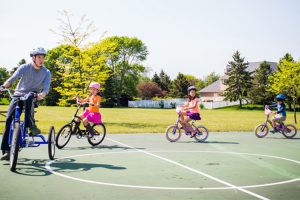 They currently employ three PCAs who help Louis continue his education at home. Together, Louis and his staff practice independent living skills, such as proper hand washing and getting ready for bedtime. But the impact goes beyond just the benefits for Louis.

“It’s just a lot more balance,” Nancy McManus said. “Lou’s school sets a lot of different goals that kind of have to carry on during after school hours. Usually the PCA comes in when Lou gets home.”

With his PCAs, Louis also enjoys going on bike rides, playing basketball, taking trips to Nickelodeon Universe and Sky Zone Trampoline Park, and spending time at the library and YMCA.

“Between the three of them they just combine,” Nancy McManus said. “Sometimes one of them has to take a day off, so they just cover each other. It’s been working out really well.”

For Doug and Nancy, having a PCA team dedicated to caring for Louis makes all the difference.