When Brian was enrolled in a social studies course as a student in high school, he was tasked with exploring a big question: what career do you want to have? Given the opportunity to explore potential career paths, Brian decided to talk to some of the janitors at his school. Through this process he developed an interest in becoming a janitor one day. “I got to interview a couple of the janitors and I kind of got interested in janitorial.” 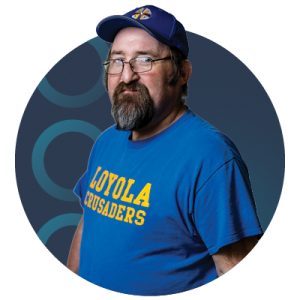 Fast forward to May of 2021 and Brian had just started a new job as a janitor in the school cafeteria at Loyola Catholic School in Mankato. After previously working in other custodial roles and having trouble finding a new job, Brian accessed Lifeworks Employment Services to search for a new job that would allow him to transfer his skills and best use his expertise. At Brian’s new workplace, he is responsible for cleaning the floors, wiping down tables, and taking out the garbage.

Starting a new job brings with it all sorts of challenges. One of those challenges, as Brian reflects, is becoming comfortable with new coworkers and a new environment. Initially, he didn’t feel close to many of his coworkers. Over time he found his rhythm and began creating connections with others as he got used to the job tasks. Brian’s manager Sandy Bach noticed the change: “He has just really opened up and he’s just blossomed all the way around.”

Loyola Catholic School is located in a scenic, hilltop area in northeast Mankato. Each morning Brian drives up the hill to the campus, something that he says is one of his favorite parts about going to work. “This fall, I went out and walked around most of the area and took a few pictures,” he says as he pulls up some photos on his phone. On the job, he takes pride in keeping the lunchroom tidy and enjoys visiting with his coworkers.

One such coworker is Jesse. Jesse also found out about an open position at Loyola while exploring career options through Lifeworks Employment Services. Brian and Jesse often work closely together; helping each other with cleaning the tables and taking out the trash. Jesse also began working at Loyola in 2021 after an extended period of unemployment due to the COVID-19 pandemic. He was uncertain if he would enjoy this new role, but after getting started he noted, “Once I got good at it, I thought, ‘I kind of liked this.’”

One reason Jesse was able to find success at his job is the supportive environment. “It’s really friendly. This is kind of like our little family. Everyone’s always looking out for each other.” It didn’t take long for both Jesse and Brian to become integral parts of the team. Bach notes that, “They’re a very integral part of the team and having them each understand their own importance is phenomenal.” Not only have they solidified themselves as hard workers, but they have both found a job that they enjoy and feel respected at. Their Lifeworks job coach, Amy Rademacher, recalls, “I get texts from them all the time. I love my job. For them, they’ve never had a job where they’ve really actually felt that value before so that’s a real game changer.”

Both Jesse and Brian have been recognized as responsible and dependable staff members. Bach explains that “When they see something that needs to be done, they just do it. They don’t need a prompt and it might be something they’ve never done before. All of a sudden, they’ll just grab a rag or a mop or broom.” 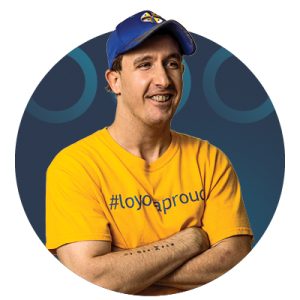 For Jesse, learning valuable skills on the job has also translated to lessons he can apply to his daily life. He mentions how his role at the school has taught him how to stay busy, take things day by day, and to have initiative. He also acknowledges that his job has taught him patience, especially when working in a busy school cafeteria filled with students ready for lunch.

Outside of work, Jesse enjoys walking around the mall, running and lifting weights, and spending time with his fiancé at home. Jesse is getting married next year and is excited for his upcoming wedding. When asked about the impact his fiancé has had on him, he said “She’s changed my life.”

Having careers at Loyola has been a positive change for both Brian and Jesse. It has both given them a strong sense of responsibility, provides a steady income, and is a place where they both feel valued and supported. Jesse offers this piece of advice for others looking for employment: “Make sure you’re reliable. Be a little early. And just be really hardworking.”

Are you looking to start or advance your career? From exploring your interests to continually building skills – we are here to offer guidance and support throughout your journey.