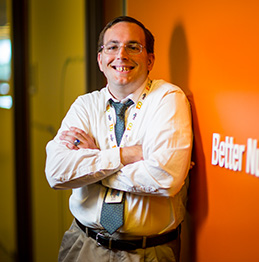 Since 1995, Cargill has partnered with Lifeworks to employ people with disabilities in positions that are essential to their day-to-day operations. Currently, two Lifeworks associates serve as valued members of the Cargill team: Paul Brick and Sasha Porter.

Brick’s 13-year career at Cargill began first as a contractor before being hired directly by the company.

“I work in the mailroom independently by sorting the incoming mail, delivering packages to Cargill employees, and transferring any miscellaneous mail to the correct locations,” Brick said.

With 2015 marking Cargill’s 150th anniversary, Brick said he enjoyed completing special projects such as stuffing mugs, chocolate bars, pens, and journals in commemorative bags for new employees around the world.

“Paul is a pleasure to work with and I would consider him a true friend,” said Lisa Ingemansen, who has worked with Brick for five years. “He is very professional and is always eager to help out. You can count on him to do a good job!”

Along with Tammy Tesar, Brick and Ingemansen play an integral role as they support the clerical needs of the leadership team and the general Cargill office.

Brick’s can-do approach to projects, a never-ending commitment to following through on daily tasks, and a remarkable sense of humor have helped him earn a positive reputation among his co-workers.

“[His co-workers]] love him,” Ingemansen said. “I was recently in Madrid for a work conference and Paul’s name was brought up. We were all exchanging stories of Paul’s funny jokes and how much we enjoy working with him.”

But it’s not just his jokes and sense of humor that have allowed him to thrive.

“Paul exudes excellence,” Tesar said. “You can count on him to roll up his sleeves and do a good job. He puts his heart into everything he does.”

For Lifeworks client Sasha Porter, it’s a similar commitment to excellence that has allowed her to build a career at the largest privately held corporation in the country.

“Sasha always has great positive energy and adds that energy and positivity to our department and office environment,” said David Pellinger, product operations and analytics manager for the Cargill AgHorizons department where Porter works.

Porter’s work focuses on filing documents and records for two farmer solutions products that have more than 3,000 customers and are regulated by government entities. This work requires great attention to detail and is referred to for both day-to-day and auditing purposes.

“Sasha is reliable and consistent,” Pellinger said. “We always know when to expect her, and she helps us manage the overall workload well in both the short and long term. She is able to flex her time and does a good job of switching priorities based on what work is most time sensitive.”

As she’s worked alongside Pellinger and others in the Cargill AgHorizons department over the past two years, Porter has made a noticeable impact not only through the fine work that she’s done, but in the positive effect she’s had on team morale.

“Sasha’s warm personality has helped her integrate herself into our team, and she has truly become a member in all senses,” one of her co-workers said. “We look forward to her positive presence, and we know we can trust her to do the work we ask of her well.”

Fill high-turnover positions at your business by partnering with Lifeworks to employ people with disabilities! We’ll put our 50 years of experience to work for you and provide long-term, dedicated workers who will improve the diversity of your workplace and help you save money.