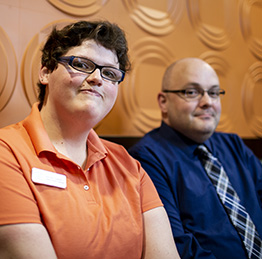 When Bridget Campbell first started working with Adam Hutzenbuhler, she had been a housekeeper at Best Western for almost a year. As guest service manager, he saw her positive attitude and the energy she brought to the housekeeping team.

After a couple of years, Campbell moved on to work as a housekeeper at Microtel, while Hutzenbuhler was hired as general manager of Fairfield Inn & Suites, a Marriott brand. When happenstance brought them back together, Campbell jumped at a promotion opportunity.

As assistant executive housekeeper at Fairfield, Campbell oversees a team of three to six housekeepers in any given shift. While she maintains responsibility for cleaning rooms herself, she also inspects rooms to ensure cleanliness and what she calls the “Marriott standard way.”

She’s in charge of over half my employees,” Hutzenbuhler said. “The longer she’s here, the more professional she’s gotten.” 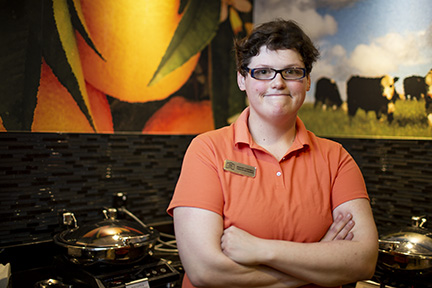 Though Campbell is typically focused on her housekeeping duties, she’s earned a reputation as a team player who is always willing to take on additional responsibilities.

“She’ll come in whenever we need her and her work ethic is fantastic,” Hutzenbuhler said. “I think she’s one of a handful of employees who has actually come to work every day. She’s never missed a shift, which is amazing in this day and age.”

Like many of his employees, Hutzenbuhler said Campbell always wants more hours. The difference is that Campbell always shows up and follows through when her name is put on the schedule.

“She’s never said no,” Hutzenbuhler said. “She would be here seven days a week if I’d let her.”

Because of her new role as assistant executive housekeeper and the increased wages that come with it, Campbell made the decision to transition off social security, allowing her to work full-time and not worry about the implications to her benefits.

“She wanted full time and she’s my assistant exec, so I gave her full time,” Hutzenbuhler said.

And that’s far from the only way Hutzenbuhler shows his employees he values their contributions.

“He spoils us,” Campbell said. “On weekends when we’re super busy, he’ll buy us food. He takes care of us.”

With Hutzenbuhler’s leadership and the occasional check-in from a Lifeworks job coach, Campbell has the support system she needs to continue to be successful – and maybe even earn another promotion.

If I had an exec housekeeper opening, she’s the heir to the throne at the moment,” Hutzenbuhler said.