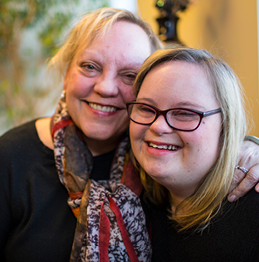 Since 1986, the Lifeworks Annual Awards have celebrated the remarkable stories of people with disabilities and the individuals and businesses who support them.

Each fall, we accept award nominations in four categories: Advocate/Volunteer of the Year, Employer of the Year, Personal Achievement, and Staff Excellence.

Once the nomination period has ended, an independent selection committee is tasked with reviewing nominations and selecting those who will be honored at the Lifeworks Annual Celebration.

Lifeworks is pleased to announce the 2017 honorees:

Employer of the Year: Lunds & Byerlys

For the past 15 years, Lunds & Byerlys has partnered with Lifeworks to help people with disabilities build successful careers. With an uncommon commitment to equity, inclusion, and collaboration, Lunds & Byerlys is a standout employer partner.

With nearly a dozen Lifeworks associates currently serving as grocery baggers, custodians, and café assistants at company stores in Chanhassen, Edina, Maple Grove, Plymouth, Wayzata, and Woodbury, Lunds & Byerlys has consistently demonstrated its passion for maximizing the strengths of its employees.

Maggie Erickson does it all. She is a student enrolled in the Bethel University Inclusive Learning and Development program, a reigning Miss Amazing Minnesota, a board member for the Down Syndrome Association of Minnesota, and a participant on the Self-Advocacy Committee of The Arc Greater Twin Cities.

In her spare time, Maggie mentors first-year students, volunteers at the St. Paul Jewish Community Center, and serves as a ticket scanner at Target Field. Maggie has also been an avid Special Olympics athlete since age nine and typically competes in four sports each year.

In the past year, Niko Winjum has embraced change and made tremendous strides toward building his independence. As a participant in a Lifeworks employment pilot program, Niko identified his strengths and interests, learned how to use public transportation, and was directly hired by the Eagan YMCA as a result.

Niko has also started living on his own, vastly improved his communication skills, taken on leadership roles, mentored others, volunteered his time, learned to cook, clean, do his own laundry, and live an ordinary life.

Without Jon Ehresmann & Andy Thornbrough, the Lifeworks Rock of Ages band would not exist. For more than five years, the duo grew what was once just an unrealized dream into a full-fledged rock band featuring people with disabilities.

Despite working other jobs and performing in other bands, Jon and Andy have poured their heart and soul into Rock of Ages and invested in the growth of its members. Under Jon and Andy’s leadership, the band expanded its repertoire to include more than 20 songs that the group regularly performs at shows across the Twin Cities.

Volunteer of the Year: Dennis Stern

Imagine being able to travel the world without ever setting foot outside. That’s what volunteer Dennis Stern makes possible for those at Lifeworks Eagan. For the past seven years, Dennis has taught a weekly geography class to a captivated audience and recently started bringing the joy of animals and nature to the folks at Lifeworks Bloomington.

By mixing personal photos of his travels with videos and music, Dennis takes people with disabilities on unique adventures that allow them to live vicariously. Dennis rarely ever misses a week, diligently prepares new material for each class, and makes each session interactive and absorbing.

Thank you to everyone who submitted a nomination for the 2017 Lifeworks Annual Awards! A special thank you goes out to this year’s selection committee:

These individuals volunteered their time and had the difficult task of choosing just five award winners from dozens of nominations.

Save the date! This year’s award winners will be honored at the Lifeworks Annual Celebration on Thursday, April 27, 2017 at The Depot in Minneapolis!