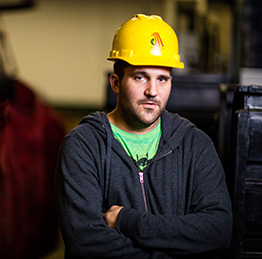 A family-owned industrial laundry facility, AmeriPride has been operating for more than 125 years selling and renting just about everything businesses need to keep their facility and their employees clean.

For the past eight months, Lifeworks Associate Brian Kley has served as a warehouse worker, where he works on a three-person team focusing on loading and unloading products.

With service centers in Rochester and Sioux Falls and trucks and semis transporting products everywhere in between on 21 different routes, Kley often puts in long hours – and he prefers it that way.

“Physical labor is what he likes to do,” said Lifeworks Job Coach Chris Jensen, who helped Kley with the job application process and works with him in an ongoing support role. “If he can get overtime, he’s all for it. So, there’s times where when they are short-staffed, he enjoys being able to stay later, come in earlier, or whatever.” 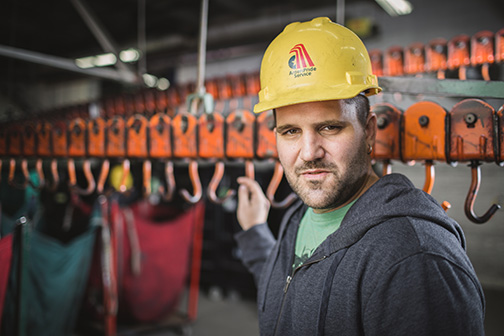 Lately, that’s meant working 10-hour days and 50 hours a week. In a position where there is a lot of turnover, Kley takes pride in a job well done.

Because of his penchant for perfection, he takes it personally when someone doesn’t show up for their shift.

“He wants everything done right,” said Customer Operations Manager Scott Voss. “He leads the group. He’s been through everything. He does a great job of training the new guys. I’m very impressed with what he does and how he handles himself.”

As he’s put in long hours on the job, Kley has also built comradery with his co-workers.

“The one thing I’ve noticed with Brian is he fits in very well with the guys,” said Customer Administration Manager Troy Wetzel. “It took him a while, but the route men have warmed up to him and tease him – in a positive way – and Brian dishes it back.”

Recently, Kley has also discovered one of his favorite benefits – being able to track his vacation hours – even on his phone.

AmeriPride is one of approximately 300 Lifeworks employer partners in the Twin Cities and greater Mankato area. Are you interested in hiring individuals with disabilities at your workplace? Visit our Employer Partnerships page for more information. You can also make a donation today to support the Lifeworks Employment program.